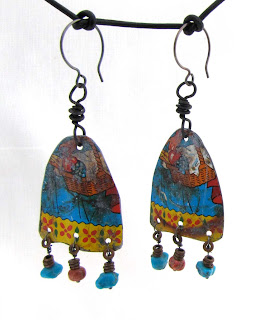 Remember all that vintage tin I got from Suzanna at Sushipotparts?
Well I've been workin' it in between orders for crusty rusty bits in my Etsy shop.
You guys are keeping me hopping with the orders. This is a first for me I'll have you know.
Somehow it doesn't matter how many orders I get in the vintage and supply shop it just isn't the same glory as selling my own stuff to you all. Many thanks, I know that there will be some more torch days coming up. 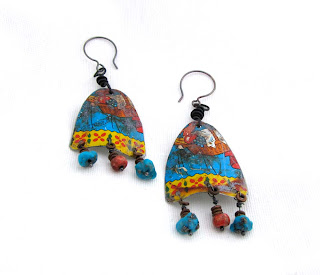 So this is what I've been doing with the tin.
I am discovering something about designing assemblage style pieces...
that they don't necessarily hang the way they look all nice and flat on your work table.
In fact they tend to flip around quite a bit. 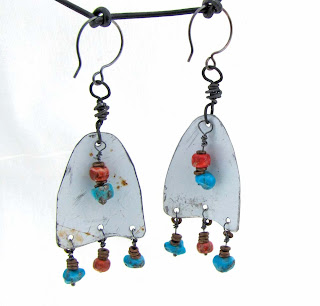 I decided to solve the problem on the previous earrings by adding a bit of bling to the back side so they won't be just one sided earrings ( especially with the big blank white space on these.) 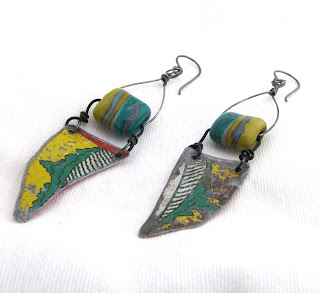 Wouldn't you know I just happened to have some of my beads that matched the tin, already made and waiting on my work table? 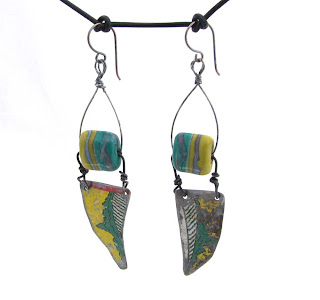 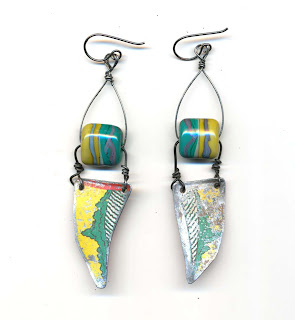 I have lots more tin left and some pieces cut out in the queue waiting for me.
I had a mishap the other night which involved rescuing an elderly man on the roof.
We were enjoying a warm night on the patio with our friends when one of us heard someone crying "help me!"
In house downhill from us lives a man that has obviously suffered a stroke before.
It's dark and I try to find where the voice is coming from and he's on the roof! ...and it's dark out!
Well I basically had to run around the block while I was on 911 so I could determine his house number.
Meanwhile the guys were trying to find access to his yard which was quite a heap of obstacles.
I went through his house to get to the backyard while my other neighbor climbed up to help get the man down. Meanwhile I was directing the cops to  his location and they were having a time of it getting up the steep ladder. One had to take off his bullet proof vest because it was getting snagged on boards and nails. I went to assist holding the ladder and didn't realize there was a ditch between me and the ladder and fell snagging my ring on some wire that was holding the ladder to the was. It practically yanked it out of the socket. The old man got down and we ascertained that he had been up there for a half hour and presumably was fixing his antenna. ( he has speech problems from his stroke) He was uninjured just stuck and I have a numb ring finger that doesn't seem to be keeping me from making stuff so all is well.
It was an exciting night though. 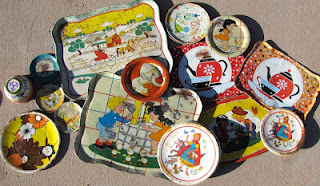 Posted by Numinosity at 9:39 AM