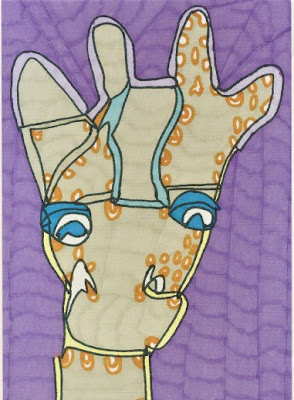 A Spotted Giraffe ~ one of my favorite prints 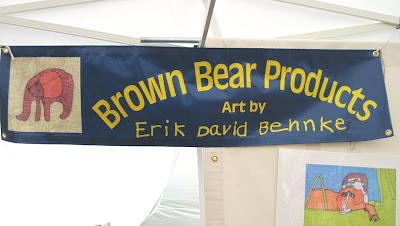 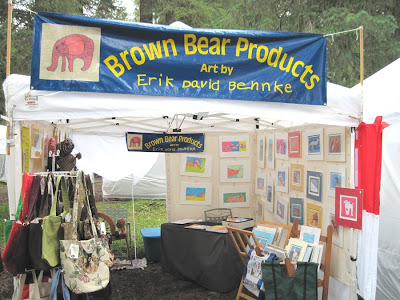 Booth at the Girdwood Forest Fair 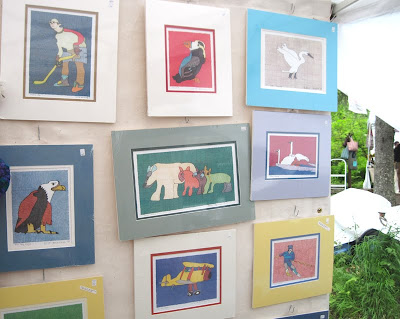 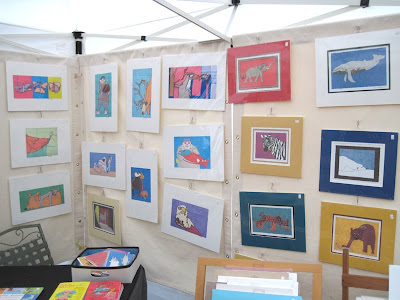 Last month I was set up at my booth at the Tanana Valley Farmer's Market when a woman and her son stopped by my booth. The young man set about to organize some of my pieces which were in disarray. I can really use help like that! I recognized him immediately because he's an Alaskan artist that I've seen at quite a few local shows.  He has an amazing gift for illustration in his own distinct style. His wildlife illustrations seem to spring out of him with a unique stylized flair that are delightful and that transcend simple folk art.
I've enjoyed talking with his mom Linda and hearing her tell the story of Erik's journey as an artist. Since then they were my neighbors at the Girdwood Forest Fair and I had the opportunity to chat with his mom and take a few photos of their booth. Watching him engrossed in his drawing with his huge palette of ink pens, painstakingly filling in his black line drawings were a fascination for me. Deliberate and meticulous in his style, each drawing different from the next.
Erik David Behnke is 33 years old and  has Downs Syndrome and austism.  Here is his story taken from his website where you can find his cards and prints and books about his life.
Erik is a young Alaskan Artist, experiencing Down syndrome and autism.  He was born when his parents, Steve and Linda, were trapping in the Lake Clark area of Alaska.  His first years were spent wrapped in a sleeping bag, strapped in a box on top of a dog sled, piled with all the family's worldy goods.  Life was hard and by age 3, they moved into the fishing town of Dillingham, Alaska on the Bristol Bay coast.
Years later his mom and dad split up, thus his mom returned to life as a "bush teacher" in rural Alaska.  Erik and his younger brother Chris, grew up moving from bush school to school around the state.  They saw peninsula grizzly bears, caribou, trumpeter swans, ducks, moose, salmon, beluga and killer whales plus many other animals in the wild as their mother tried to focus attention toward the natural beauty and wildlife of Alaska.

Most of his childhood was spent in southwest bush Alaska with infrequent plane trips to "town" (Anchorage) to buy supplies.  Colors, coloring books, drawing paper, tracing paper, markers, paints, chalks were always purchased for him by his family since he loved to spend hours in artistic endeavors.  No one realized he was teaching himself to draw in the hours he spent each day looking at other art, books, and the world he lived in.  For years, mom had dreamed that Erik would someday work as an artist but it seemed impossible due to the level of his disability.

In August of 1997, Erik's mom was offered a teaching job "on the road" in the Copper River area.  It was perfect since she preferred small school with multiple grades.  She, overnight, became Erik's physical education and special education teacher.  This was the chance to see if it was possible for him to become a professional artist.

The blessing of Kenny Lake was a wonderful dedicated teacher aide, Linda Rutledge.  They closely teamed up and continually supported the dream of his mother.  They put white drawing paper in front of him with black ink pens and gave him piles of old books filled with wildlife shots.  Progress was shockingly fast for him.  Soon other artists from the valley were telling them that Erik was a "gifted" artist.  As Erik's style developed, mom realized they were entering into terra incognito.  All winter the team of three learned about the art profession, asked questions  and read everything they could find on art and art publishing.

In April of 1998, Erik and mom took his files of drawings to Anchorage art galleries in search of a market.  He met the owner of Aurora Fine Art, Diane Louise, and she patiently studied his work.  Tears were soon pouring from his mom's eyes as the gallery owner announced,  "I would like to be the first gallery to introduce Erik Behnke to the World!"  It was a beginning.

That summer, 1998, Erik had three professional art shows in Anchorage, Fairbanks and Glennallen.  After a busy summer, the family settled into a second cold winter in Kenny Lake where the temperature dropped below 60 below zero.  This didn't stop Erik from focusing on his art.  He designed the art for the 2001 Special Olympic World Winter Games poster, worked on his coloring book illustrations and signed his first professional contract.

Erik finally graduated from tiny Kenny Lake School and now sells his originals, 52 prints, cards and more in nine art galleries, book stores and gift shops.  Erik and his mom moved to the art community of Homer in 1999 where he now happily spends 3-5 hours per day doing his art. His art is now all around the world and new markets are being pursued daily.

During the years of 2000-2007, he continued to have several art shows each year, not only in Alaska but also in Washington D.C., Spokane, Boston, Kansas City, Denver and Phoenix.  More art shows are always being pursued.  As the artist for the World Games, the largest sporting event to ever occur in the state of Alaska, his art reached many more countries around the world.

In 2005, his coloring book, Alaskan Animal ABC Coloring Book hit the market and can now be purchased on this website, galleries, book stores and at his art shows.  In 2006-7 his 13 new cards and 14 new signed and number limited edition prints were added to this website and stores.  He continues to travel in the summer around Alaska and the "States" doing art shows during his mothers vacation from school.    Erik and his mom's hope is that other parents of children with disabilities will dare to dream of career success like this for their children.

Erik and his mother, Linda, participated in fifteen events in the 2007 art and book season.  In the summer of 2007, the first edition of  Erik's Story, finding his gift's against all odds in rural Alaska, was for sale around Alaska.  The second edition will be ready for the summer of 2008. Erik and Linda are having fun traveling to all the happenings.

Where will all this lead Erik?  Only time will tell.
Posted by Numinosity at 10:12 AM