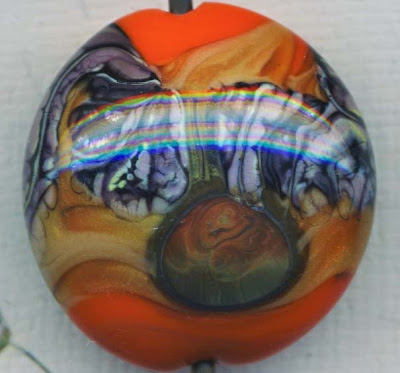 Yes, My blog is named NuminosityBeads and I do indeed make lampwork beads as well as playing with these other mediums that I've posted on already.
I'm putting in my last few hours at the torch in the next week before we head south for the winter. I spent about an hour yesterday playing with some twisty cane that I had made. One of the "Hot Headed Honey's" from Anchorage had told me about a cane that she had learned in a workshop. I tried what I thought she had described but also added a bit of my own adaptation so I think it came out quite different in the end. I'm hoping to take a class from Michelle Waldren this winter and gain some more skill with the twizzler cane making.
I've also been trying to build up inventory in my series of "Element" nugget beads. Aurora Bead and Craft of Wasilla, AK (yes, that Wasilla) will be carrying the small nuggets now.
Just one last bazaar here before we leave at the University of Alaska-Fairbanks this weekend and I'll also be featured at our local First Friday event at The Magic Carpet Gallery of Global Goods on Friday evening, also in Fairbanks.
Posted by Numinosity at 9:23 AM