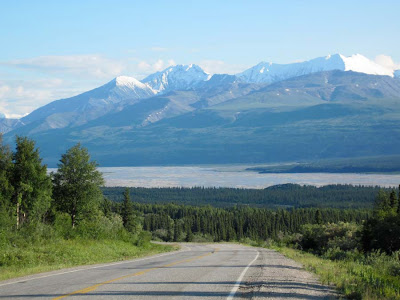 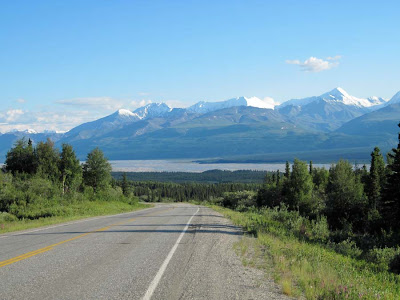 The beginning of the epic road trip, about 45 minutes from where we live. 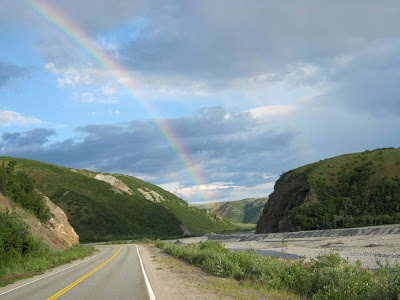 Sometimes I forget how incredibly stunning this state is! 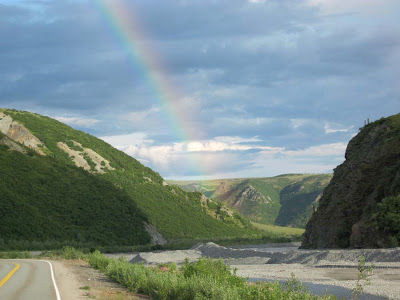 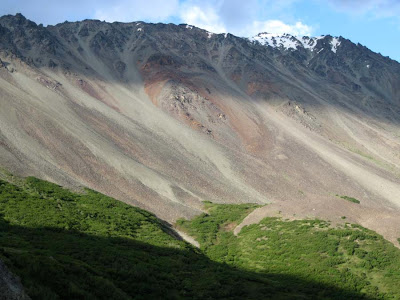 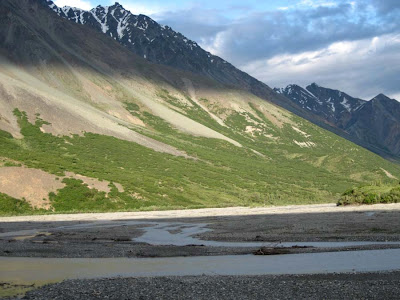 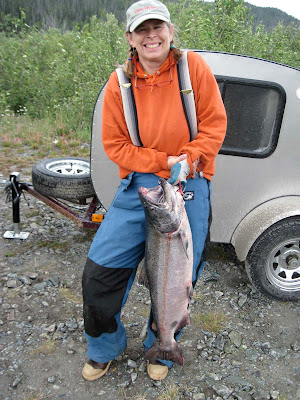 Hurry up and take the picture, this mutha is heavy! 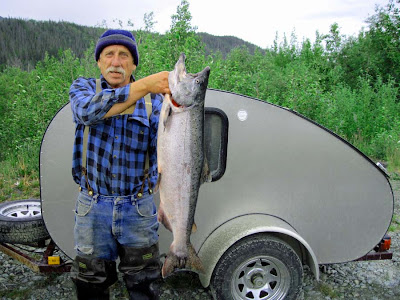 The fish looks as big as the Teadrop trailer here! 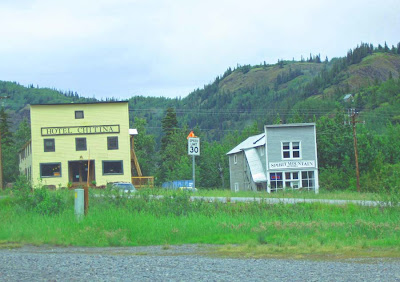 The lovely town of Chitina.
The place on the right is Spirit Mountain Artworks where Candace was seen posing with Mountain Heather's hats recently. 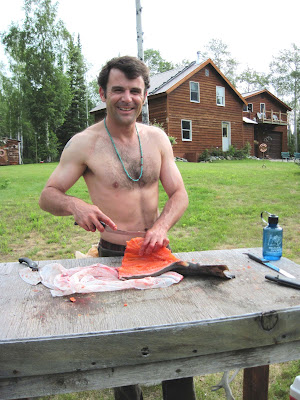 Some musician guy I found to help me with the fish while my husband was gone :)
( Thanks, Ned-man)

Summer is an incredibly busy time of year for us in Alaska It seems that we want to make use of every minute of daylight which is a lot considering it doesn't get dark at all until August.
One of the benefits of living here is access to some of the best salmon that you would ever hope to eat. I had my first taste of canned smoked Alaskan salmon when I was about 7 years old. My uncle that was stationed here back in the 60's had sent us a case. I would beg my mom to crack open another can, I loved it so.
There are two ways that we employ catching out "Copper River Reds" One is by dip-netting which is a great deal of work. You need a 4 wheeler or a bicycle once you get to the town of Chitina (pronounced chit-na) to make it to the bluffs by the river which you then climb down and tie yourself off to a tree and scoop your massive net in hopes of netting the salmon that is crazily swimming up stream in hopes of spawning. If you're lucky enough to find an eddy where they like to take a bit of a rest on their long journey you may catch one. If the fish are "running" you can pluck out your family's limit of 30 salmon in several hours.... or not!
Then you have to bop them on the head and carry them back up the steep embankment and find a place to clean them and so on.
Some people even hire boats to take them out to the optimum fishing spots that can't be reached by the rough road.
The other easier way is a fish wheel. This is a giant hamster cage looking contraption that is set up in the river that has baskets that revolve as the current pushes against paddles and will scoop up the spawning salmon and sluice them into a storage box that keeps them alive and until you are ready to clean them. We were lucky to have a subsistence permit that allows us to share a fish wheel with a friend that lives in Chitina.
We drove down with my little Teardrop trailer when Dave got off work Thursday night. He was tired so I drove the four hour trip which was a stunning night, full of sun, rainbows and incredible landscape. We arrived at midnight (still light) only to find that the river was high and the fish wheel was jammed with logs from the high water. The next morning our friend Mike and another friend showed up to correct the problem. The men worked for several hours in hip boots trying to unjam the logs and jockey the fish wheel into the ideal position for scooping the fish. They had to pound rods into the riverbed to secure the wheel and retie it to trees so it would stay anchored in place.
Then we watched the mesmerizing motion and schlucking sound of the revolving baskets for hours, in the rain. The fish wheels upstream from us were jammed as well and when they would loose their logs they would then float into ours and jam it up again and so it went, Dave having to wade out and unjam. I only had knee boots and wouldn't have felt too confident even in hip waders in that current. Time passed. We had only planned for that one night as I wanted to be at the farmers market in Fairbanks on Saturday. At 4:00 we had only gotten two puny salmon and one big one. I proposed a plan, one that sounded good at the time. The run was sure to get better. I would leave Dave and the trailer, go home and go to the market and come back down to fetch him on Sunday. Then we would have all that extra time to get more fish. As this decision was being made we snagged a huge 35 lb. (almost 16 kg) king salmon. Dave seemed delighted to stay and I set off for the 250 mile ride back home with the fish in a cooler. I had so much caffeine for my trip home that I didn't sleep well that night, tossing and turning til 2:00 AM and had to rise at 5:00 AM to get to Fairbanks to set up. There's another 100 miles. I had a wonderful sale right at opening that made me feel that the trip was worthwhile, after all this whole proposition was a gamble for fish and sales as well. I return back to Delta, ( another 100 miles) and hear that some friends are playing music at the "Far Bar". We don't get that much live music out there, so I decided to rally and join them with the help of more caffeine. How that turned into another 1:00 AM night I don't know! Our musician/archaeologist friend Ned and his girlfriend Reija stayed at the Garaj Mahal that night.
The next morning I still needed to clean and package the fish. I was a bit worried about wrestling the king salmon so I got some help from Ned who ended up cleaning all of them, We got them put away and then I was on the road again to go fetch Dave. And then I find out the bad news- only two more fish showed up in the wheel all that time I was gone. The river had come up again making the conditions bad for the fish wheel again, the dip-netters weren't doing any better either. So much for the easy freezer full of fish we had hoped for but it was a good adventure if not a bit crazy considering I had put on 1200 miles between Thursday and Sunday. (1200 miles = 1930 km)
Tonight it's king salmon steaks for dinner and I'll be relishing every bite! 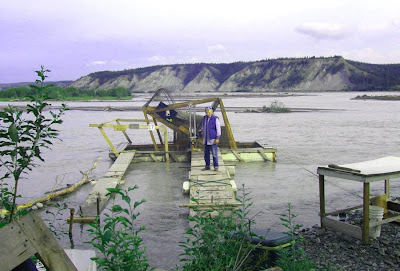 Here's a picture of the fish wheel last year with our Brooklyn born Bisbee friend Julio.
When it's a grey day a little photoshop helps to brighten things!
Posted by Numinosity at 12:43 PM