Supply and Demand - My Resolve to Curtail Supply Shopping 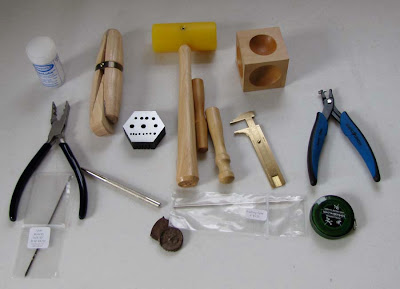 Day 1~ Taking steps to finish two assemblage projects. Wondering how I'll attach something without brackets from the hardware store. Guess I need to get inventive on this one. Maybe some bent rusty metal with holes drilled will work.
Day 2~
Contacting Rio Grande about the floor model drill press that they said might be available since they were out of them when we visited (BEFORE the RESOLUTION!)
Still waiting for them to get back to me on that.
Thinking of adding some silver wire to the order if they have the drill press since I tried to get some the day we left Santa Fe at the Bead Show but the show didn't open until 11:00 instead of 10:00 like I thought and we had to hit the road with 500 miles ahead of us (BEFORE the RESOLUTION!)
I think I see some justification fermenting here, don't you?
On my way to the gym I stopped at the THRIFT STORE but only GAVE THEM a bag of plastic bags. Did not look in the store! After my workout I dilly- dallied at the hardware store and admired cut tacks and cut nails and brackets that could be used for my current project. Did not buy anything!
A list of items is already starting to form of things that I wish I'd sought out before my moratorium on supply buying.
Such as: preservation wax for putting on patina-ed pieces of metal and Briwax which has been recommended for distressing painted items according to Pat Chapman
This could be more difficult than I thought! I'll keep you posted.
Posted by Numinosity at 11:50 AM