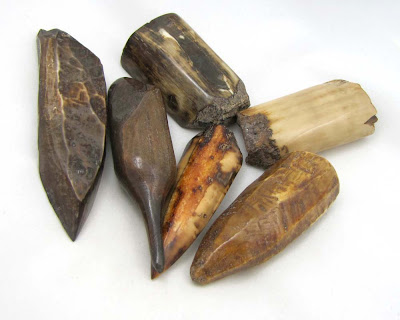 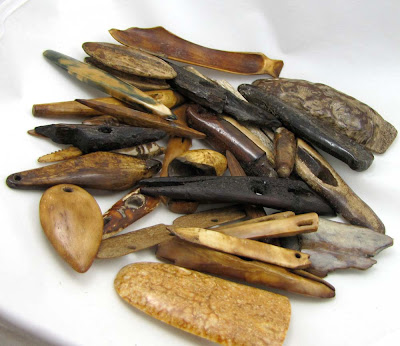 Artifacts that have been hand worked and polished sometime in recent or not so recent  history. 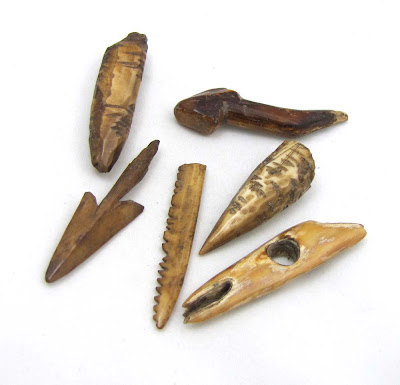 These are carved from fossil walrus ivory that washes up on the beach over the years. They were then carved and used for spears, fishing and sewing implements 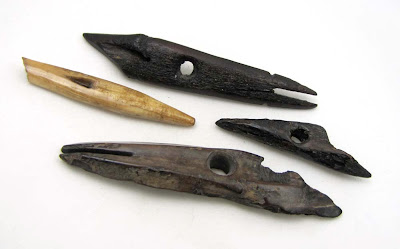 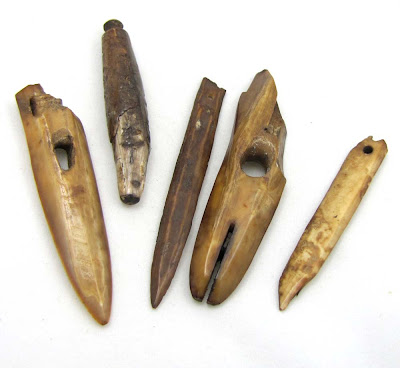 In my search for fossil ivory for a fellow artist I was fortunate to have access to a stash of a long standing collector of fossil ivory. He passed away a few years ago and his wife was ready to part with some of his impressive collection.
Sam had visited the Inuit of Little Diomede Island over the years during his professional life and was privy to local midden heaps during his many visits.
He was always respectful of the locals and their culture. 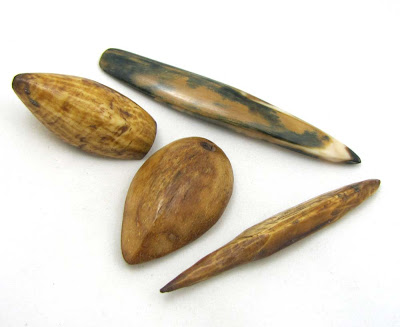 The fine polished finish and markings and variety of color variations are amazing. 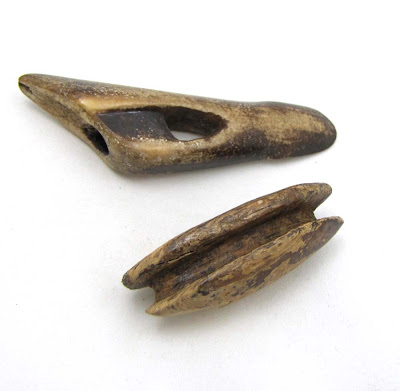 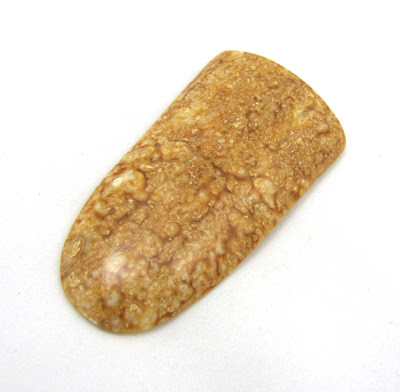 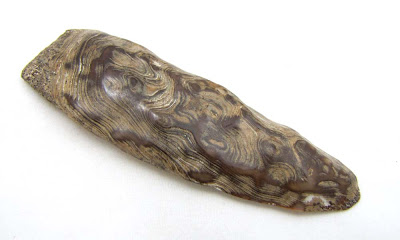 Looks like a natural example of mokume gane doesn't it? 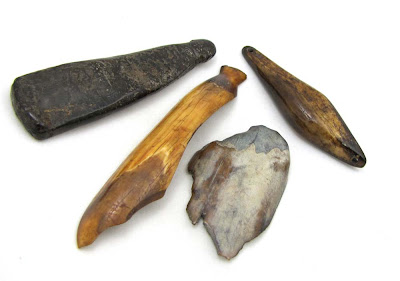 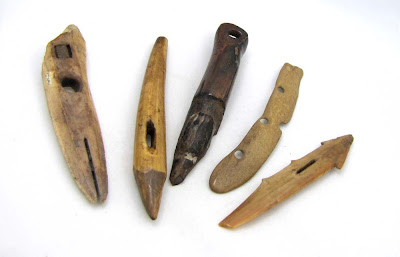 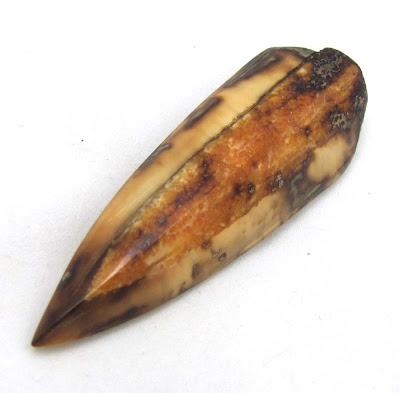 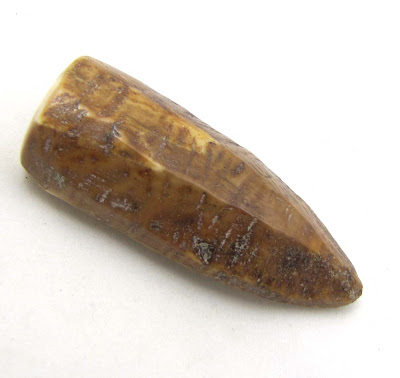 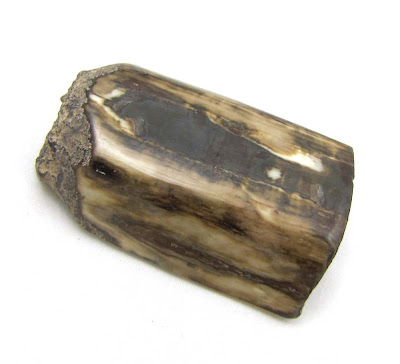 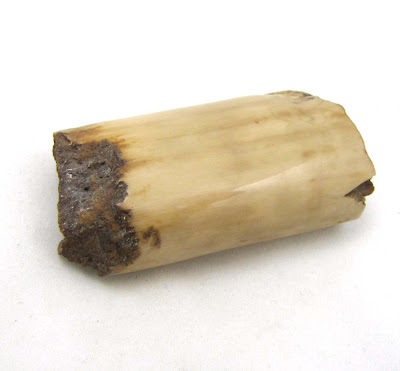 Here's a little bit about Sam's amazing life.
I was a pleasure to have gotten to know him a bit before he passed away. My husband and Sam could talk for hours about his extensive research and collecting.
I feel honored to be able to use some of his pieces in my artwork.
He made some amazingly complex and beautiful mobiles of his own with his collection.
Many thanks to his wife Patty that graciously let me pile through tubs of his collections and let them live on through other's art as he would have wished.

Longtime Fairbanks resident Sam Stoker died at home Friday, June 11, 2010.He was born July 9, 1938, in Alva, Okla., where as a boy, he brought home bones and fossils he'd collected from the surrounding plains and became a crack shot, an A-student and an Eagle Scout.Sam studied history, government and mathematics at the University of Oklahoma, lettering in marksmanship and earning a degree in combined studies. His graduate work was in creative writing at the University of Iowa Writers' Workshop. After traveling for nearly two years, first in Alaska then in South America, Sam returned to Oklahoma where he convinced the OU Research Institute to send him to Fairbanks as a researcher on a vole study. It was one of the most fruitful turnings of his life, focusing his interests and triggering his passions.He enrolled at University of Alaska Fairbanks, completing a Master of Science in 1973 and his Ph.D. in 1978, both in biological oceanography. His research took him to the northern Bering and Chukchi seas, and to Little Diomede Island for several seasons, where he studied subsistence harvest and marine mammal populations.These seasons were among the highlights of Sam's life. He loved Little Diomede, the work, the people and his adventures with them, and he still is remembered there.Sam was an active scholar for more than 30 years, producing studies for state and federal agencies and commissions including the Alaska Department of Fish and Game, U.S. Fish and Wildlife Service, the National Oceanic and Atmospheric Agency, and the International Whaling Commission.He studied bird, fish and marine mammal populations in northwest Alaska, monitored the subsistence harvest of seals, walruses and whales, and studied both prehistoric and present ecological conditions of the seas that support them.From 1986 to 1991, Sam was Gov. Steve Cowper's special adviser on biological resource issues. When the Exxon Valdez ran aground in 1989, spilling 11 million gallons of Alaskan crude into Prince William Sound, he began work that lasted the coming decade, for the state then for Exxon, on oil spill assessment, response planning and mitigation efforts in the Sound.Wherever he was, Sam Stoker was comfortable in a flannel shirt and jeans, at 20 below or 70 above. He figured he was fully provisioned for camping if he packed a tin of instant coffee and a fishing rod, adding a box of Pilot bread and a jar of peanut butter if it was going to be a long trip. He was happiest canoeing a river on the North Slope, watching whales in Prince William Sound or anywhere in Africa watching elephants. In his lifetime, Sam was a man of finely honed skills. He was a marine biologist and researcher, a writer, an artist, a gardener who produced tender and tasty sweet corn, and a photographer. He leaves behind two unpublished novels and a collection of beautifully balanced mobiles.

Posted by Numinosity at 2:08 PM