Score at the Store! 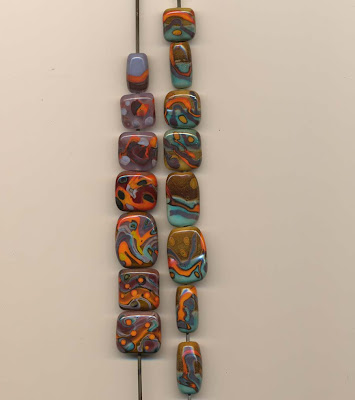 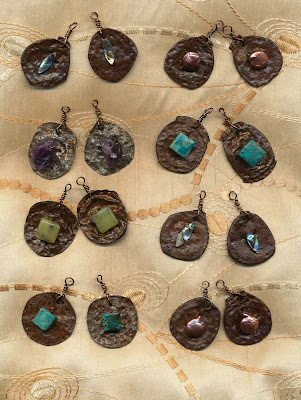 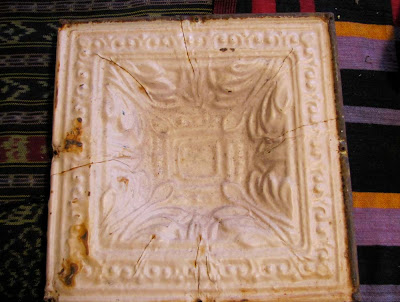 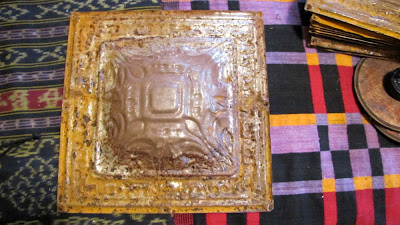 Reverse side of the tin ceiling tile
Nothing like being away from my stuff for a month to make me go wild in the studio upon returning home. I've been jumping into projects like nobody's business. Just deciding which artistic direction to go each morning is a quandary. Will it be a hot glass day, a rusty bits day, a paper day or some combination of all of them? I've been kind of jumping around , playing with my new stuff and trying to remember the ideas I had before we left on our whirlwind trip.
Yesterday I got out the rusty bottle caps I had been picking up on my walks to the gym. They're much easier to find in Arizona. In Alaska the plows and snowblowers pick them all up before they have a chance to get crushed and rusty. These rusty bits I use in my "Roadsmithed" earring series. I've been pairing them with vintage look ear wires that I get from Cindy's Wicked Good Beads. Unfortunately I left those findings in Alaska. I'll have to finish them when I get back home there.
A couple of hours in the glass studio too, trying to stick with a theme or a series in similar colors. I have to really focus on making a series in the same colors, I get bored and want to jump around and experiment with other colors but beads seem to be more saleable. OOAK is alright for focals but SOAK sells beads (several of a kind)
Today I couldn't resist doing a bit of antiquing in Old Bisbee. I was dropping my husband off at the Bisbee Mining and Historical Museum where he had just gotten a volunteer docent position. It was an uncharacteristically rainy day in the southwest. I was hoping to show some of my work to one of the shops for consignment as well. I headed down to the bargain basement of on of my favorite Old Bisbee shops, Miners and Merchants and found a wagon full of turn of the century or earlier tin ceiling tiles with oh, so many layers of paint on one side and tin in different stages of rustiness on the other. My aim was to buy ten of the 1 foot square ones if the price was right. They weren't marked and the cashier didn't happen to know the price but said that she'd call me after speaking with the owner. I dashed off to the gym and awaited her call between reps and my aerobic workout. When she called with the price for all ten I swear my heart beat went higher than it's normal count (never mind the caffeine I had directly before my workout) The embossing is at least 2 inches deep in the center. They are certainly destined for some projects, resale and barter too.
Posted by Numinosity at 3:33 PM