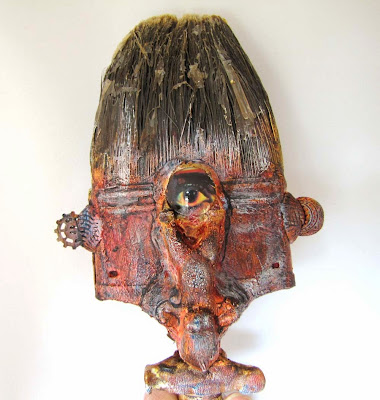 We just arrived back in Arizona after the 5 week trip to the states from Alaska.
It was pretty intense with lots of road travel and socializing.
I started out  by attending Art Is You in Stamford, Connecticut which put me on the east coast, my former stomping grounds.
I had been wanting to take a class from Michael DeMeng for years, in fact had one canceled here in Arizona that I had signed up for a few years back. He does have online classes too.
I ended up taking two of his classes to make up for that  missed one.
What you see here is some of my "Good Brushes Gone Bad" projects.
I learned a lot about some really cool paint applications and new materials that I'm itching to expand on ( notice the baby being birthed beneath the eye)
That eye was from some Bollywood CD trash that I found in India) 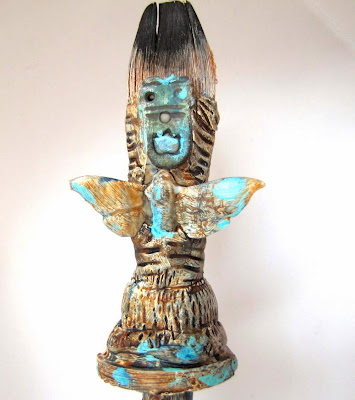 This one seemed very Alaskan totemic don't you think? 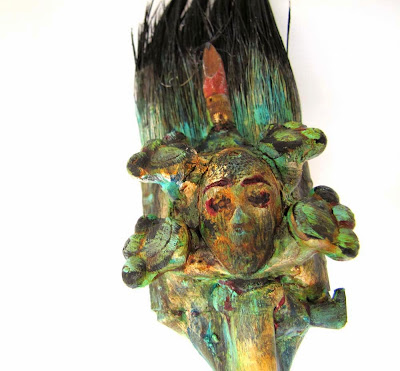 The face in the middle was from my Uruguay Haul last year and I'd been saving that little stub of a pencil for a long, long time.
Those little paw thingies radiating out from the face are the bottom half of some plastic squeeze toy.
That's the kind of  fun you can have in a Micahel DeMeng class! 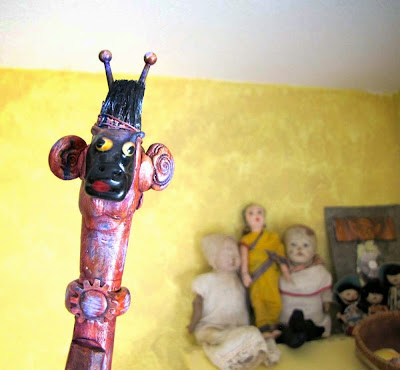 I used one of my old lampwork dog bead attempts in this one. he always seemed rather Simpsonesque to me. 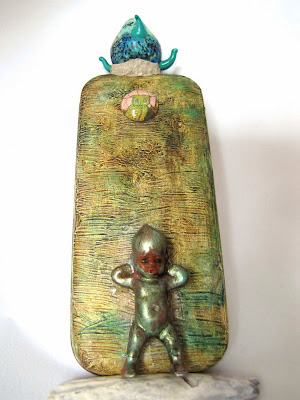 Using another one of my relaxing babies and a anenomonic lampwork piece I made this cover for this tin in the "Teeny Tiney Shriney" class. I still need to paint where I connected the glass to the top. 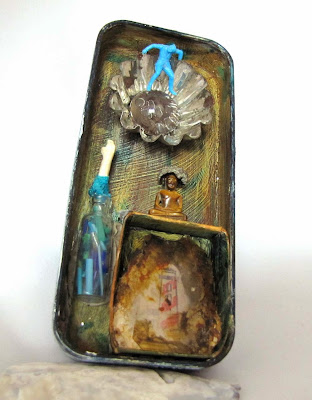 I loved learned his technique of coloring mica to make it look really old.
I forget what he called it -"Dead Guy Under Ice" or something to that effect.
I used a lighthouse from a Beech Cliff sardine can to harken back to my Maine roots and since it was my first job at the cannery and all. 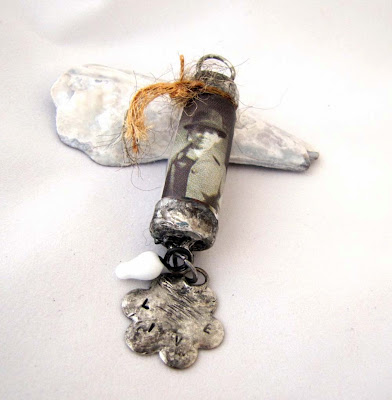 I took Cat Kerr's "Tube Soldered Pendants" class and it was my first foray into playing with solder. 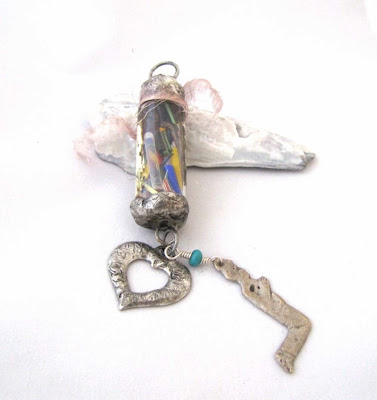 I filled the tubes with glass stringer nubs from my lampworking. 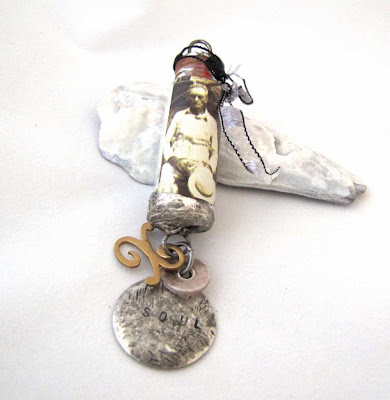 It was great to finally meet Cat after years of blogging and she had been a participant of my ill-fated Candace, the traveling doll escapade.
We grieved a bit at the loss of our dear Candace who went missing right before she was to be returned to me after a year of travel  'round the world. 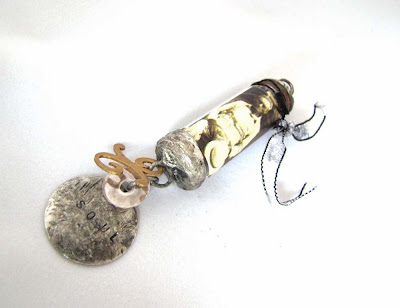 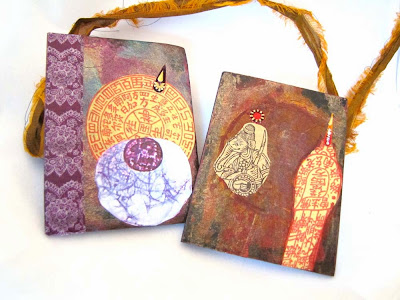 I also took a class with Seth Apter of mixed media fame.
Learned a lot about layering and glazes that I'll be able to put to use. This class was called
"52 Pick Up" which was going to be a mini journal of  52 playing cards that are painted and collaged.
This is front and back cover- reflecting a bit of Indian theme it turns out. 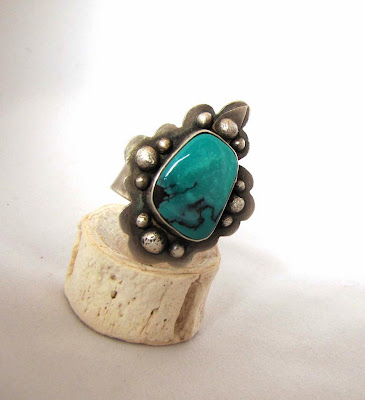 The most challenging class was with Richard Salley and Jessica Jordan as I have only a couple of day long metal smithing classes under my belt. This was also made in one day.
I'm pleased to know that they will be providing workshops during the gem show in Tucson in February.
How convenient! 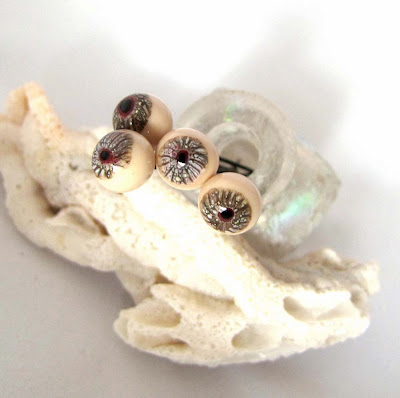 Little did I realize that the influence of Michael DeMeng would translate so directly into my lampwork upon my return home. I had used murrini on the ends of headpins before but when I used Donna Millard's murrini that I had picked up when I saw her in Alaska these magnificent eyeballs appeared! 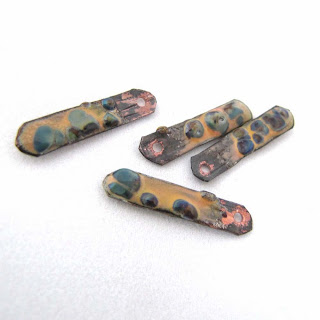 I warmed up to the torch making some more matchsticks and have been trying to come up with some batches to list so that I can fill my shop once again.
I am taking custom orders and that's why you might not be seeing so much new stuff appearing quite yet. I am working on it! 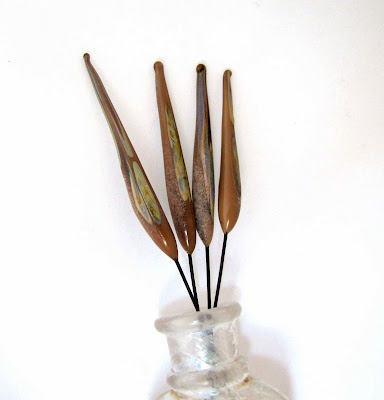 After my CT workshop I flew to Dayton and met my bead buddy and jewelry artist extraordinaire Nikki of LoveRoot. She has a new facebook page by the way and is already sharing some of her magic  in tutes and such. Go Nikki!
We had a great lunch together, her and her man and mine and she gave me some uber cool handcrafted vodka for my birthday. It just so happened to be her birthday when we met that day.
I gave her some beads of course. I still have some of the vodka left and perhaps she still has some beads left.
From there we set out for the Michigan cottage that has been recently reacquired into my husband's family and hung out with his two sisters and some cousins for several days.
We then drove up and through Canada and down into New England ending up at my Mom's place where my brother and his family from Bali were still staying.
We got to celebrate our respective birthdays a day apart, my brother and I and also did Halloween with his young children 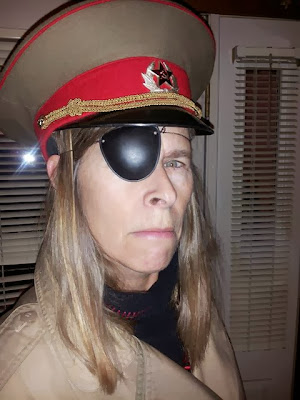 Don't I look older now?...this is right after my birthday

After that we had a whirlwind trip in a southerly direction meeting up with folks at every turn.
We did six states in one day once. All in all I saw 3 sister in laws, 1 brother in law,
1 bro, 2 sis's, 1 mom, 1 aunt, 4 cousins ( one I hadn't seen in 40 years) 3 old high school friends, 1 junior high school friend that I hadn't seen in 40 years, 2 art workshop/ blog friends, one new bead buddy and another Etsy customer. 2 old Alaskan friends, 2 nephews and one niece.
I apologize to those of you that I had hoped to visit along the way but nearing the end of the trip we were getting anxious to head to the barn. Next time, OK?

I only misplaced/left behind one hairbrush and one set of sunglasses and only lost one earring ( one of my own) gained quite a few pounds with the impossibility of avoiding wheat and gluten on the trip which I hope to wear off quickly now that I'm ensconced in Studio South.
I have two new paintings of my brother's to hang in our house here and one of Michael DeMeng's own teeny tiney shrinies for my collection.

Always a little overwhelmed as to where to begin. I missed creating after several weeks without and felt envious when I saw what you all were doing.
Best thing I can do right now is to go melt some glass!

Posted by Numinosity at 8:58 AM