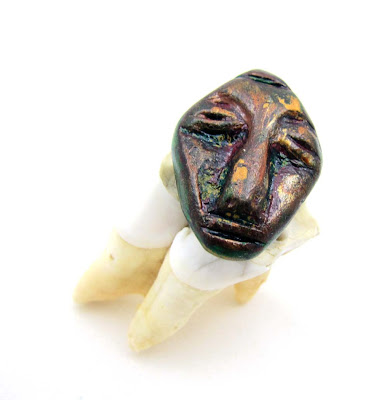 Last post I told you about my conversion from polymer virgin to polymer slut.
I had been referring to buying supplies then. Well, something happened to me last week when I was recommending Blue Bottle Tree's tutorial on making rustic beads with polymer clay.  I was purchasing the tute for a friend that I thought would like it and then I started looking into it myself and thought I'd try my hand at it. She also sells it in her Etsy shop.

This first face is an homage to my inspiration Paryb Happy Fish ( Jana) from HappyFishShop on Etsy
She has been a great inspiration to me. 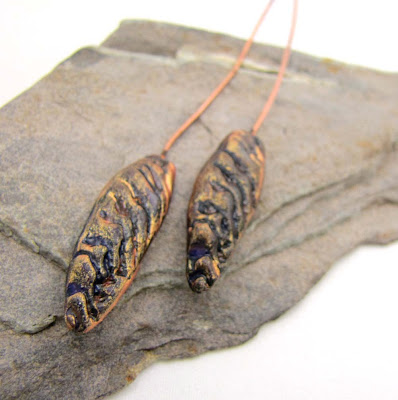 I started with what I was familiar with...headpins of course. I used copper just for a change of pace and made them nice and long so you could get a few extra wraps in 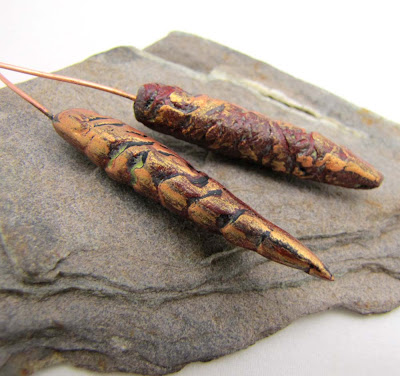 These came out pretty well I think considering that they looked like brown turds on a stick before I set to a'painting on them. 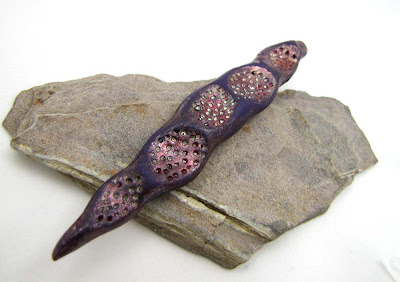 Why not one honking bigg'un. I haven't gotten to drilling holes in the pendant pieces yet. 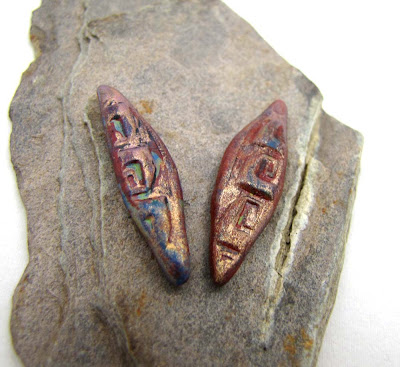 Those stamping supplies that I have neatly tucked away for my mixed media and collage work came in handy. 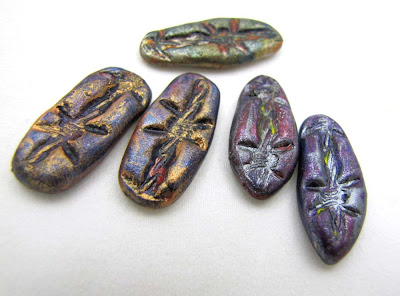 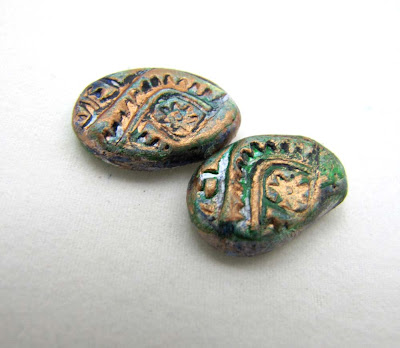 These are smaller than they look. Don't you love macro though?
I love mackerel too...reminds me of a time in my youth....oh never mind...stay on track, Kim 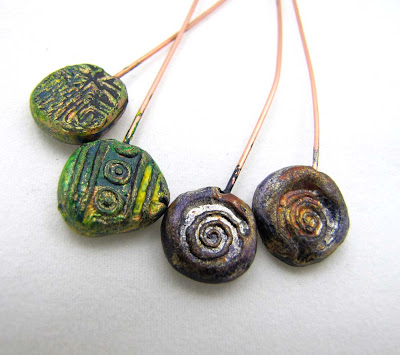 I had a palette of Michael DeMeng* colors from a workshop that got cancelled. I think I may have inadvertently stumbled across some of his tremendous color formulas
*warning creepy doll head blog 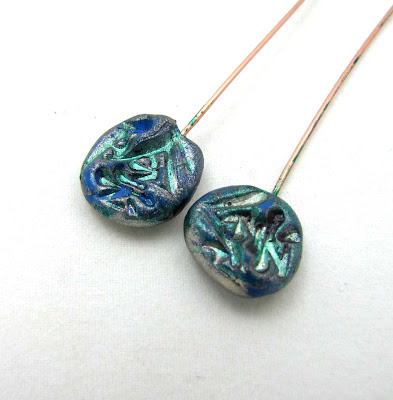 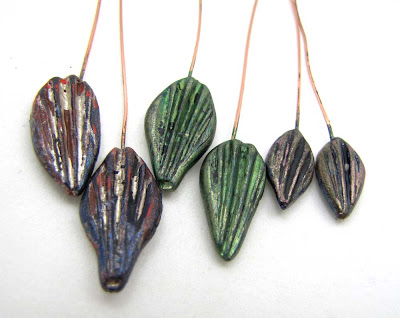 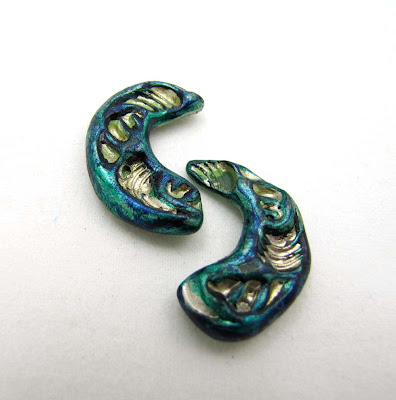 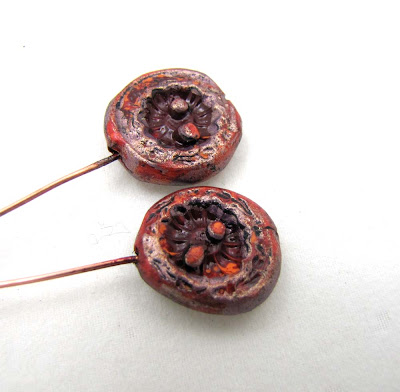 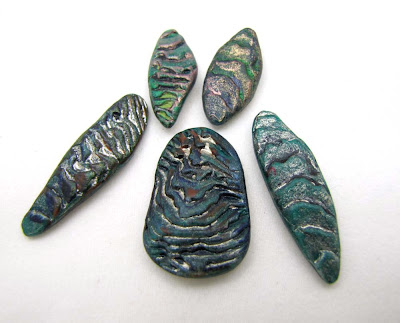 Remember my clay pieces that I couldn't fire because of the wire and then I painted them to see the effect? Well now I know it was just one step toward the inspiration for these. 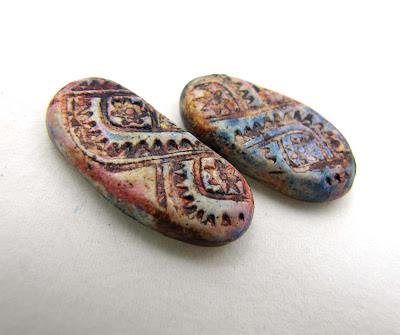 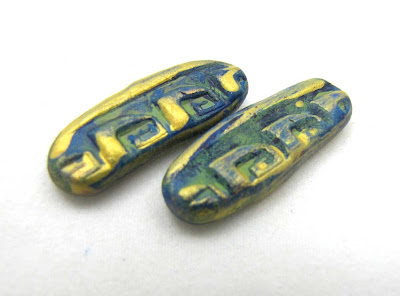 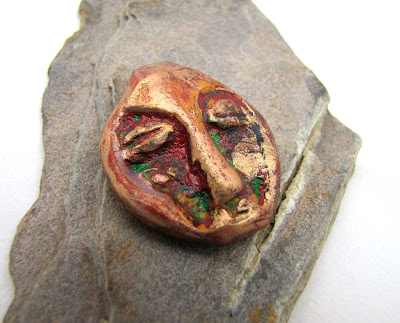 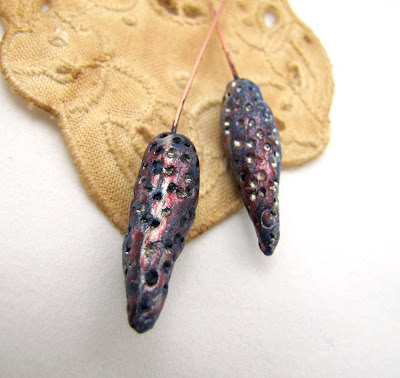 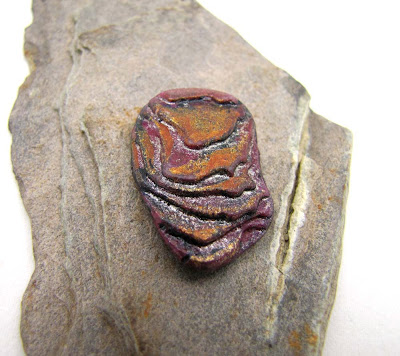 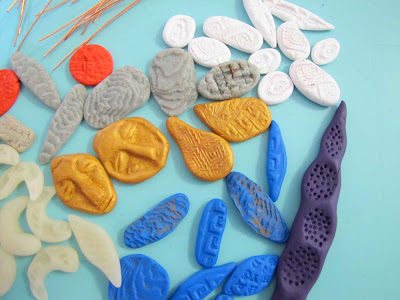 I had started out with a sampler set of colors to begin with. Red white and blue, which has to be one of my least favorite color combinations not very patriotic of me but it was the 4th of July.

It was a strange day Saturday.  I woke up early from a dream about being pregnant.  Not bloody likely at my age and I was pondering the meaning of this dream when I realized that it was my son's 30th birthday. The dream had occurred at about the exact time I gave birth to him.
Then we start on our 100 miles trip to the farmer's market on a cool and clear day and drive through a wall of smoke right near the air force base. Turns out this particular fire was caused by artillery shell practice and it's threatening neighborhoods now and may be still growing. I knew I was in for a day of being lightly and fragrantly smoked like a fine scotch or smoked salmon ( forgive me  the repetition my facebook friends, I only have so much material floating around in my head)
It turned out to be the worst day of sales that I can remember. My one order from Etsy yesterday even topped it. I was feeling mighty discouraged but some cool things happened. People visited, someone brought me some ephemera that was included in one of their Etsy orders that they had no use for, the Ukrainian lady at the Honey Bakery felt sorry for me and gave me some slices of her famous pies....and  then an old flame from way back from over 30 years ago handed me this picture which I don't even recall seeing before 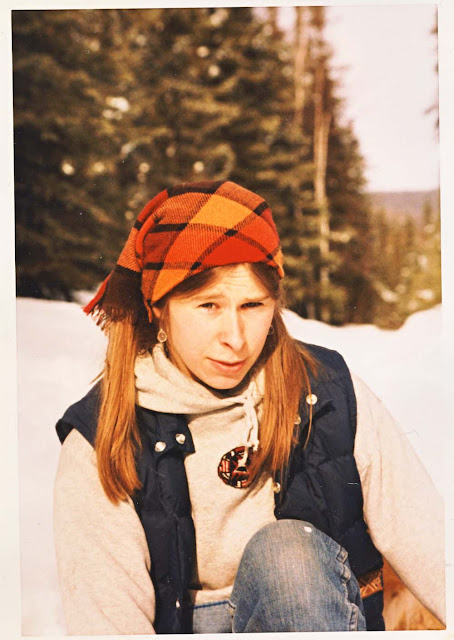 That was some of my embroidery work in my sweatshirt. 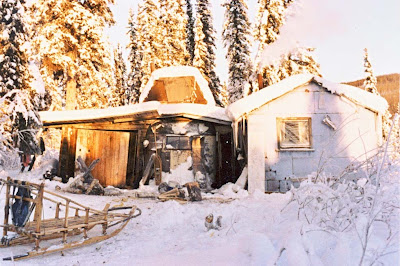 And this picture of the old homestead shack I lived in for two years with no electricity or running water.
The day ended with a wedding of a couple that had been together over 30 years ago that had reunited  only just recently. It was a reunion of sorts as well. It seems that a lot of history of my life was presenting itself to me that day.

And then I danced! 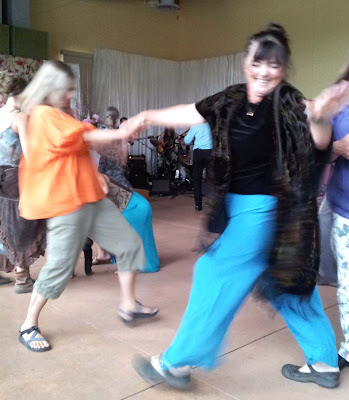 Can't you tell I had fun!

Posted by Numinosity at 1:43 PM