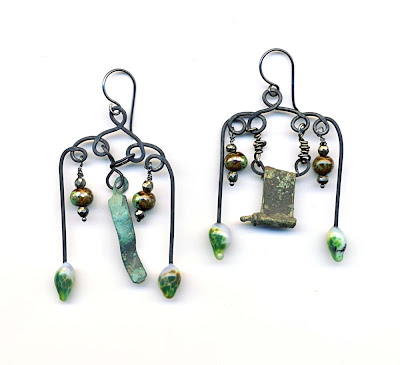 Lucky first sale of the season up here.
Rough  steel "filigree" and lampwork with relic patina-ed copper bits from the Ukraine.

I've been really putting in the time in the studio since we arrived back north.
Encouraged by some in-person jewelry sales at my first shows of the season, I've been dedicated to making more to beef up my line.
In addition to that I have been encouraged by you all that have been indulging in my 'crusty'
line of beads on Etsy so I've been attending to keeping that part of my shop beefed up as well.

Some of you that have been following me for awhile may have heard me whining plenty about the paleo- dial-up internet service that I was forced to endure out here in the Alaskan boonies.
Never mind that we live too close to a functioning military base that's supposed to ward off  missile attacks. ( I can even hear Taps playing from my house)
It wasn't enough to warrant good internet service. We broke down and signed up for satellite internet and  I am oh so happy about it.
Imagine the inverse of all of my previous whining turning into delighted crowing.
Now with my shop rolling along with the help of you good people I can save money by not making the 100 mile trip to the big town to do a midweek farmers market. We're talking $40 in gas money alone for that trip.
I still however am making the Saturday trip to my favorite Tanana Valley Farmers Market because it's fun and mostly lucrative and we usually have some other sort of townie errand to do anyway mixed in with a little bit of social too. 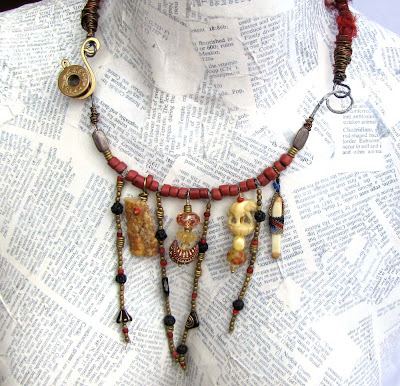 I've been employing my new model Callista to sport some of my newer designs.
She's still getting used to the camera.
I find that her boobs are a little less than forgiving when allowing for a graceful drape of some of my designs... not like real lovely ladies 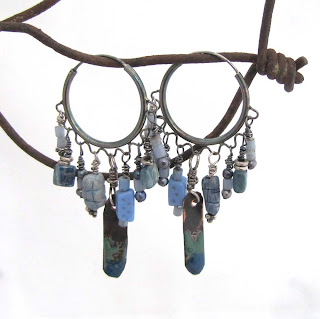 I had a stash of Thai silver chandelier type earrings that I had abandoned and have now revisited  with oxidization.
Oh yeah, these take me ten times longer to make than my former earring designs but I'm happy with the look. You all know what I mean.
The long dangles are copper torched enamel "matchsticks" that I made last year but never used.
I need to make some more of them. My punchy tool lost its part in the trip from South to North but I have secured some replacement parts from Beaducation that are also in transit from South to North.
Those delicate little pale blue ceramic beads were from a Fanci Forum trade with Robbie.
She made them herself and I quite adore them.
The little dicey ones are vintage African beads.
there's some kyanite in there too. 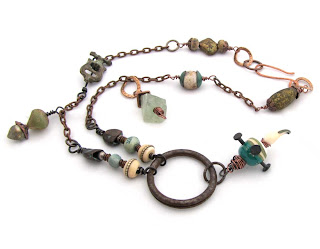 I thought it was about time that I tried designing with one of my "studnicks"
My friend called it a flaming studnick when I paired it with one of my pointy headpins.
I like that... "Flaming Studnick"
There's a vintage split keyring, mala beads and one of those cool relic bits from the Ukraine.
Those little green bead caps are some that I dapped and torch enameled last summer too.
What fun it is to find supply stashes of stuff I actually made myself but had never used. 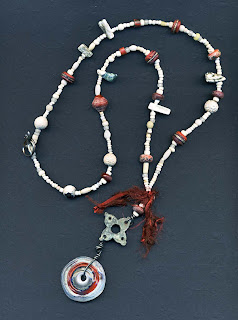 Boho Whorl
One of my mega crusty whorls in action. 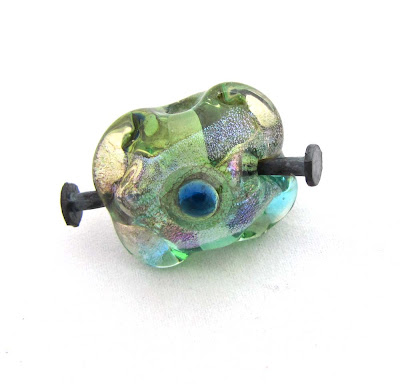 Dichroic Lampwonk
Taking it up a notch in size and complexity.
A touch of dichro in there and some of my new vintage steel cut nails from the 1970's hardware store that decided to open and sell out its remaining stock. I bought all of the packages! 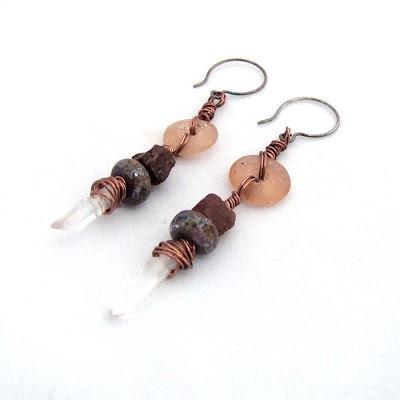 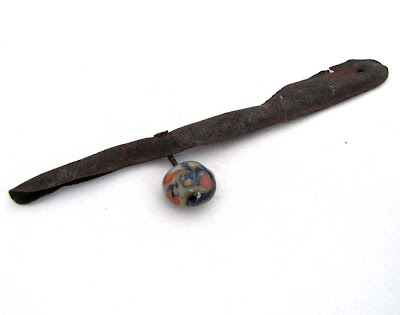 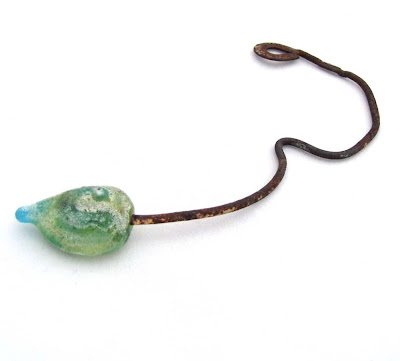 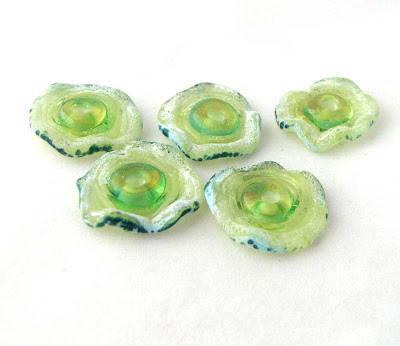 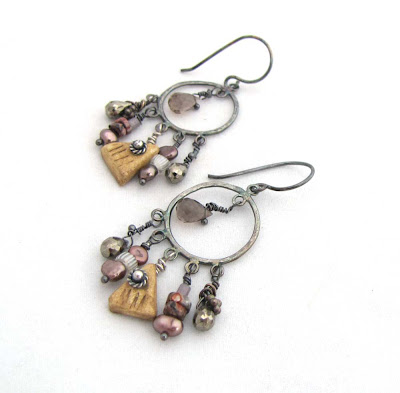 "Summer Smoke"
Some more of Robbie's ceramic beads... the triangle ones.
Smoky quartz briolettes.
Oxidized of course.
The kind of work that makes my hands hurt! 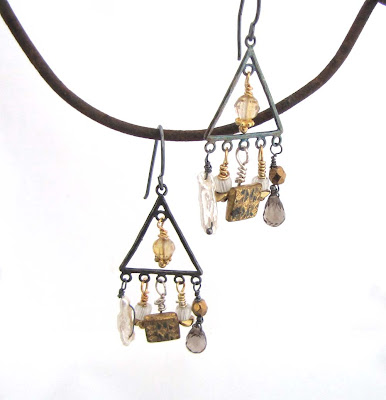 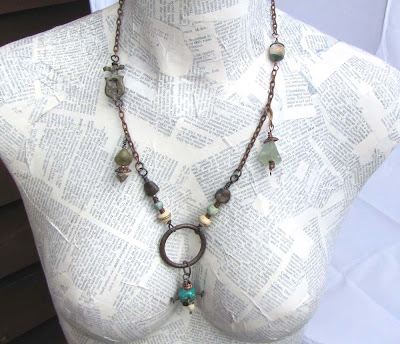 Pay no attention to that background there.
If you were guys I wouldn't have to tell you that. 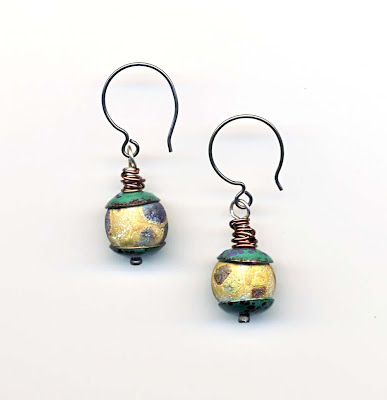 back to something more simple
A couple of my crusty beads with my torch fired enamel bead caps.
I think they's go well with the Flaming Studnick necklace don't you?
I found these hammered headpins that I had actually made myself  a couple of years ago. What fun to actually use them.

I have been planning to give you all a studio tour  but we've had such a succession of grey days that I haven't been inspired but It has definitely given me impetus to keep my nose to the grindstone in the studio.  Next on the docket is some fabric play just to mix it up a little.
That and some yardwork. Just planted all my flowers and am prepping the greenhouse
although here you could just call it preparing moose snacks.