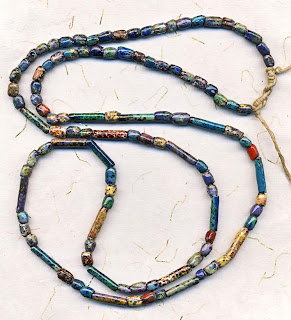 Every once in awhile I drag out some old supplies that I've accumulated and revisit old ideas.
I had found some enameled copper tube beads a long time ago and wondered if I could make some myself.
I already had the enamel and the kiln.
I bought some copper tubing from the hardware store and a tube cutter. The tubing I bought has pretty thick walls and I soon realized that it was too tedious and hard on my wrists to cut the tubing in any kind of semblance of production. I abandoned it after just a few beads although I liked how they came out.
Then I found some thinner walled copper tube beads especially made for enameling in my lampworker's supply catalog and also realized that you need a special mandrel to keep the bead in place so you can work it. I went out and bought one of those and those supplies have been sitting around for over ten years now.
Yesterday I got them out and went to town on making a bunch. I also had some copper beads that I had picked up at  an African booth at the gem show years ago that weren't quite making it with my designs. I dedicated them to the project. This strand represents a couple of hours of work  rolling and heating the enamel and frits onto the copper.
They have a great feel to them  and while I seem to have a hard time designing with tube shaped beads these work well as a bunch together and I'm wearing them right now.
I invite you to zoom in on this photo to getter a closer look at the vivid enamels.
Now I'm off to the big city of Fairbanks for chiro &  car appointments, a concert and market day on Saturday.
XOXO Kim
Posted by Numinosity at 6:50 AM