Top of the World Highway Trip... and Taylor Too 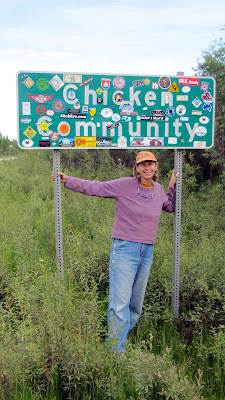 Yet another sticker sign. This one is on the Taylor Highway in Chicken, Alaska.
I'm not sure why it's taken me so long to put a posting up. There was a holiday in there and yeah, now I remember, the sun came out again after being absent for awhile.
We headed out for Dawson City, Yukon and Eagle Alaska for the long weekend over the Fourth.
We seem to like to join in with the Canadians and celebrate Canada Day on the first of July.
I think I may be honorary Canadian with my Maine roots and Alaskan residency...at least I like to think so. 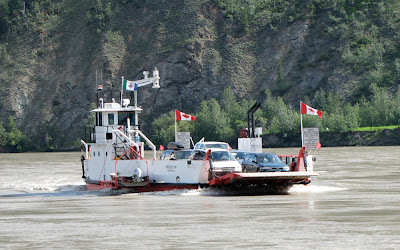 For some ridiculous reason they are closing the border at 6:00 PM (US's Fault)
so we spent a night camping at the border in the teardrop trailer and were the very first ones though in the morning. We're waiting for the ferry to cross the Yukon into Dawson City.
Dawson City is one of my favorite summertime destinations with funky buildings and boardwalks and its gold mining history. There's always fun to be had at the legendary "Pit" bar . 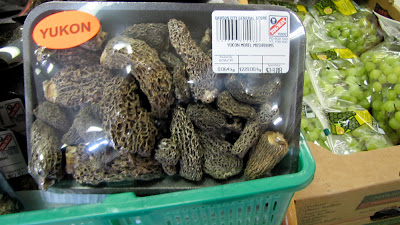 You can get some fresh morels in the local store...for a price 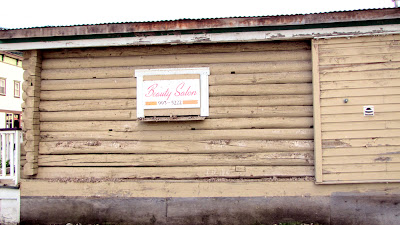 And imagine the glamour inside this beauty salon! 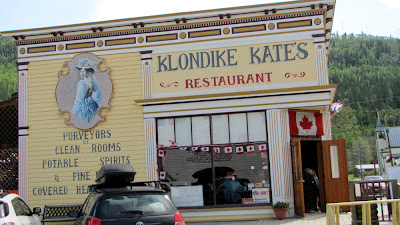 We had lunch at Klondike Kate's and I got to meet a fellow blogger,  Jeffrey from the blog
Nose to Tail
He's a cook at Kate's and writes about cooking gourmet creations with wild game...can you say tasty? 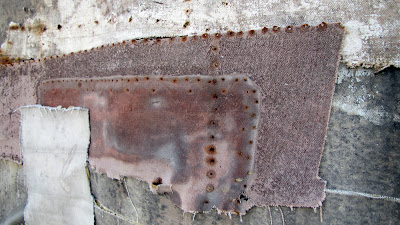 Then I found this gorgeous boro canvas shed that was completely made up of pieced together old canvas. I woulda like to roll up a few yards to take home! 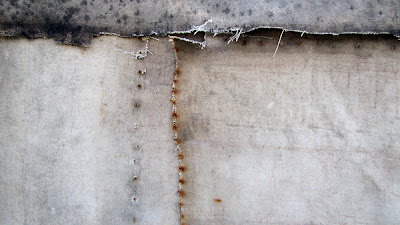 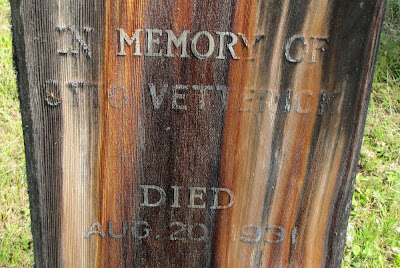 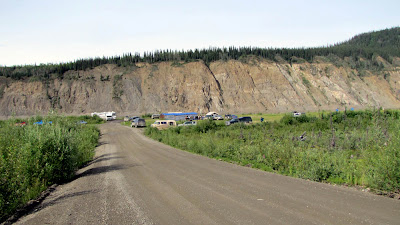 After our night in Dawson we had a wedding to go to in the remote town of Eagle, Alaska.
The wedding was right on the Yukon at the old school site. 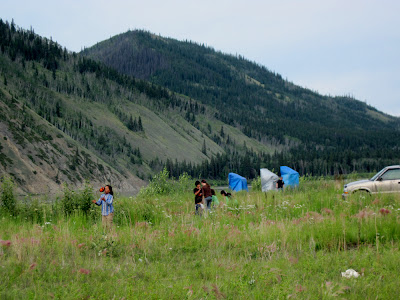 The brides father even constructed outhouses for us. There's no SaniCan service this far out.
We left a day earlier than we had planned when the rain started to dump.
The Taylor Highway had washed out last year taking a US Customs agent that was driving the road with it. It had washed out again already this year and we didn't want to take any chances on the eroding mountain road.
I did get to visit my friends Ron and Mary from Yukon Ron's
The community was hit hard by the flood a couple of years ago and road closures so that now no tour buses will travel the road which has severely impactedthe sales from their jewelry business.
They had a big tent downtown that they called the Eagle Mall which would be in operation when the buses came through. Mary is realizing that she's going to have to beef up her online sales
Have a look here to check out some of their artistry.
We talked about product photography which we are both working on.
I was impressed by her setup that mary had gotten from a friend.
After a little research into the brand "Square Perfect" I was dismayed to learn that they WON'T SHIP TO ALASKA!
I'm going to have to wait until November  or get someone in the states to ship it to me.
(any takers?) 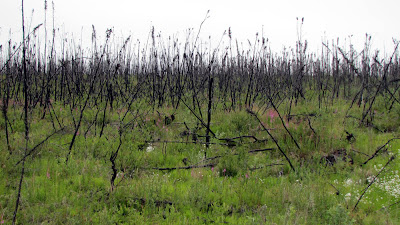 Somehow I love the way the lowly black spruces look after a wildfire.
There was plenty of evidence of a previous massive wildfire along the road from years before. 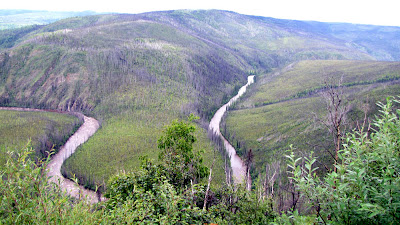 Stunning views from the Taylor Highway 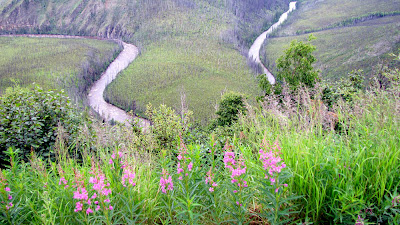 How about a little fireweed? 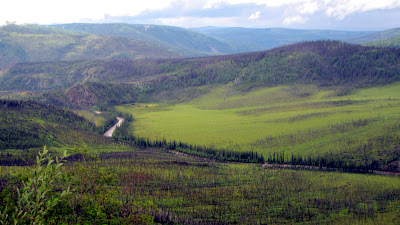 Can't you just imagine some mammoths walking about here?
What happened is that the sun finally came out last week and I wouldn't go near the computer quite so much. My frustration with the spotty access has nearly weaned me from it for the time being.
I've been working on some new designs.
I must say I have been inspired by some other folks  (Fanciful Devices, specifically) styles lately and had the idea to take the head pin process a step further and torch baubles right onto pre-made doohickeys.
You can see what she did with a pair of my lampwork whorls on this post link too. very cool, wish I had thought of it, she's so amazing with her designs. 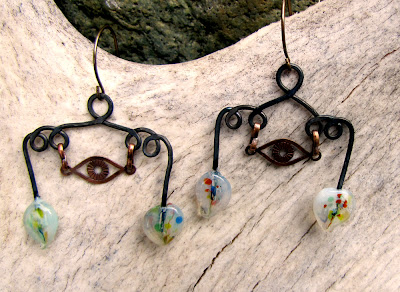 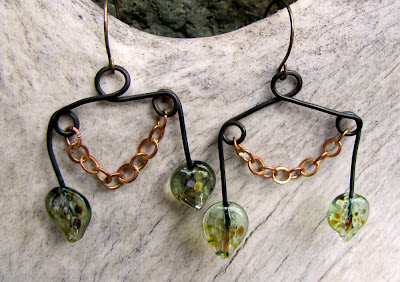 This was the first set of wires I made with 18 gauge annealed steel. 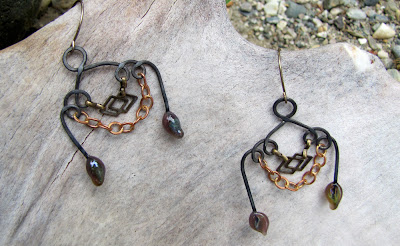 After that set I decided to add another loop and hammer them as well ... yay new jeweler's bench! 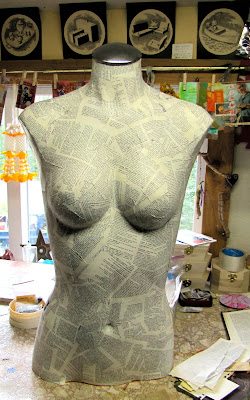 I'd been meaning to cover this torso for awhile since it was bright orange plastic.
My son just gave me a crate full of old encyclopedias to cut up. 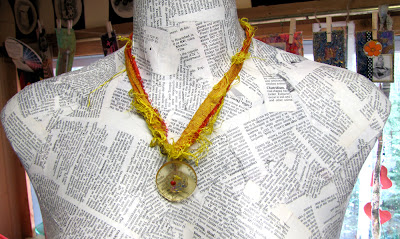 I think she may come in handy for some of my jewelry photography, don't you think?
Posted by Numinosity at 4:44 PM