Soulsticitude... Just me and the squirrels and a moose

It's been mighty quiet out here lately. This moose kept me company right outside my bedroom window the other night. I think it was about 11:30 just to give you an idea of the lightness and how it really isn't a problem sleeping as many who are not from the far north seem to think. 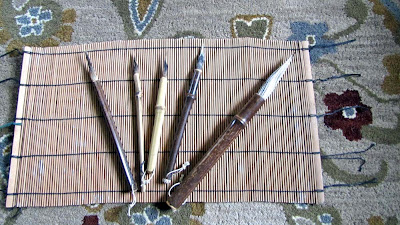 I found a wonderful person to do some trading with. We had over 25 squirrel tails from last year's nuisances. They rip into our shed and made a heck of a mess with insulation and stashing their winter supplies. Since we've been working on turning it into a shop of sorts we had to act aggressively in their abatement.
I found a site in my internet wanderings that trades tails for handmade brushes!
Linda Stauffer at
www.thepottersbrush.com

She did a handsome trade with me Don't you think?...considering that my huz did all the 'hunting'
These brushes are made for pottery slip but I'm hoping that they'll work for my walnut gall ink that my friend Pammie from The Naturalist's Notebook made. 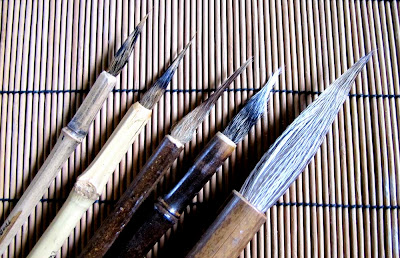 The two on the left are my squirrels and the middle one is an east coast gray squirrel,
then a badger and the mondo one is moose hair.
So wonderfully crafted and I forgot to photograph Linda's extra touch of a litttle embellishment at the end of each bamboo piece. 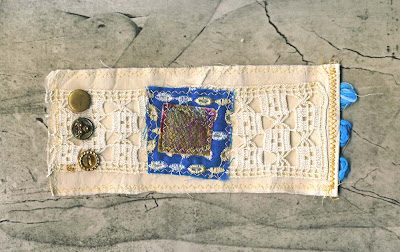 I know I mentioned making some cuff or was in the planning stages awhile back.
These are my first attempts using muslin and old lace and sari pieces and vintage buttons along with some fused fabric pieces that Lorna from Artymess had traded with me.
I was in a quandary as to how I wanted to connect  the cuffs and tried some little nylon loops for the prototype. I knew I needed some stretchyness to allow for some size differential
These loops I made seemed to be a littly too fussy to connect so I've decided that velcro closures may work better and allow for some leeway for sizes. One of the problems I have is I end up designing for my own size which runs to the thin wristed side.  Maybe these will appeal to the younger gals anyway...someone, I hope! 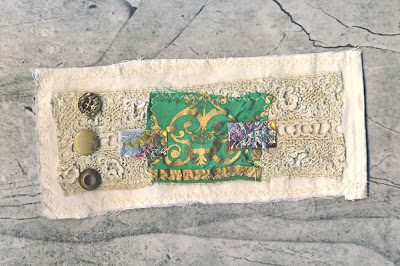 So the buttons will end up being decoration only instead of functional in the end. 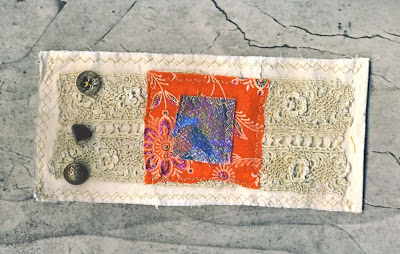 I was eschewing straight lines as you can see! 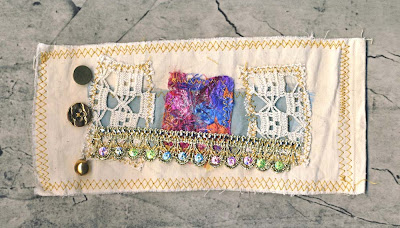 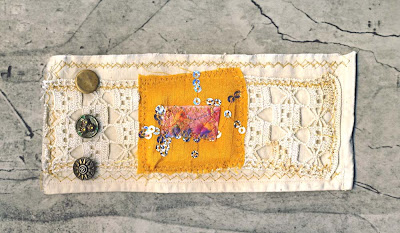 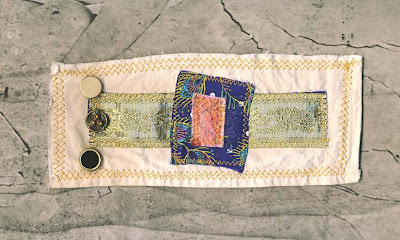 They were fun to do and a nice break from the torch for a change.
My days have been sooo quiet since the huz has been on his 12 on four off schedule.
Each morning I face my age old slowtogetup (or is it old age, rather?) and seem to be drawn to something physical first off in the morning rather than creative. dishes, walk to get the paper, stretching, lawn mowing or laundry just to get the parts lubed and moving. Sometime after 10:30 I may enter the studio and apply myself to soem sort of focus. Lately it's been production of headpins and yesterday bead sets.
I can only take about an hour at the torch for a sitting and  feed myself or wander to the garden or check emails in between before resuming. My only high speed access is a 14 mile round trip to the library whic takes a chunk out of my day but it feed my need for some sort of socialization and plus there might just be another disc of 'In Treatment' waiting for me from Netflix at the PO.
I've never been the type to hit the studio after dinnertime but quite often make jewelry in front of the tube  if the Chair of Doom hasn't done me in with it's it's reclining magic.
I really feel the need to apologize once again fro my lack of reciprocity in commenting on your blogs. By the time I have skimmed through somedays sitting in my car in the parking lot I just can't seem to focus enough on making the comments I'd like to. Somehow with the leisurely home viewing I have with my high speed in Arizona I am much more in a commenting mode.
This doesn't mean I don't appreciate you all!
This last week my dial-up even failed and I've been working on getting that up and going which for the time being is working better on my 2007 Imac for some reason... I can actually see your photos now! but still can't comment. I've had reports that commenting has been an ongoing problem with blooger lately too so I do hope you'll forgive me. (tsss...I said blooger!)
Posted by Numinosity at 12:10 PM