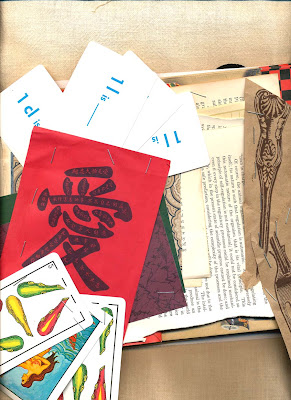 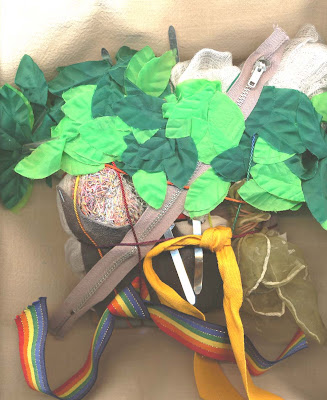 This will spend 7 months exposed to Arizona desert sun and monsoon season. 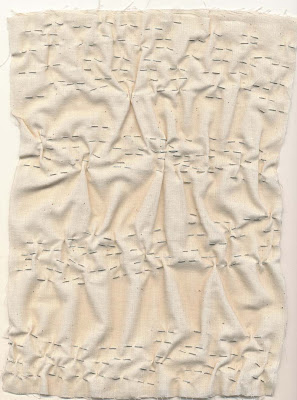 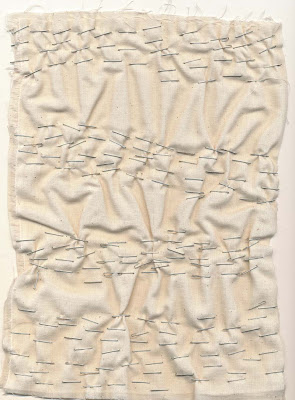 Stapling Muslin
Recently I caught up to someone's blog that was involved in Seth Apter's Altered Page Disintegration Project. (I wish I could remember whose it was, I need to start taking notes when I visit and comment on blogs because I find I'm losing track really quickly!) I'll update this after some sleuthing.
I was enchanted by the idea of disintegrating bundles that are left out in the weather and using the components in later projects. My aesthetic has been embracing the Japanese idea of Wabi-Sabi, the impermanence and shifting with age and deterioration and disintegration.
I gathered up suitable materials that would most likely change with six months of Arizona monsoon and scorching sun and wind. I assembled two bundles, one for materials and objects and the other primarily paper.
Then I had the idea of stapling muslin in a design onto muslin. I'm always finding rust spotted muslin in antique stores from pins etc. I thought it would be a rather nice wabi-sabi shibori as long as the staples rust as I hope! The staples bunched the muslin slightly so I'm pleased with the design so far. Rust will be all the better!
I'm going to leave them out for the six months I'm in Alaska and see what I'll come back to next winter.
Posted by Numinosity at 1:04 PM