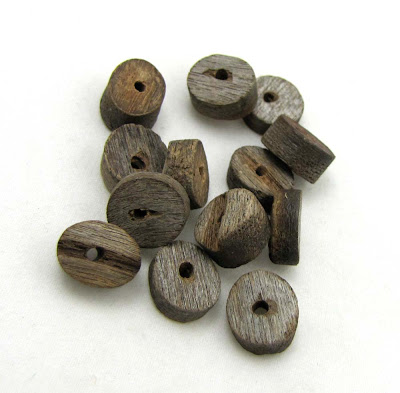 Another time machine post about my lifelong progression in Beadland
The first beads I ever made were these.
I was 16 and doing some beach combing at our bayside camp in Maine.
I spied an old washed up boat that had these wooden plugs shriveling up at each screw hole.
I pried them out and had my dad show me how to use a drill.
I am so happy that I saved some after all these years. 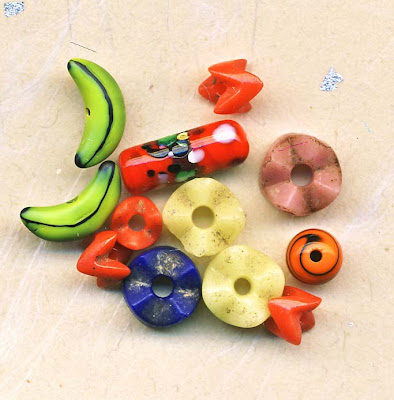 These were given to me by an old boyfriend when I was 17.
Let's just say we were on a "journey" together over the course of an evening.
He would place a bead in my hand one by one as the night progressed
They seemed so magical and special each one and at the end of the night he handed me a velveteen bag full of more beads that he had gotten on a trip to a bead store in Boston.
I was so thrilled!
...and as you can see I saved some and the seeds were planted. 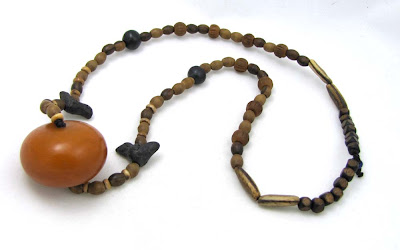 One of my early necklaces from about that same time.
I know that those ceramic birds are ones that he gave me.
That amber is actually bakelite, which I didn't know at the time and was so surprised when I came to know how lightweight amber actually is.
but these African faux amber beads are still collectibel. 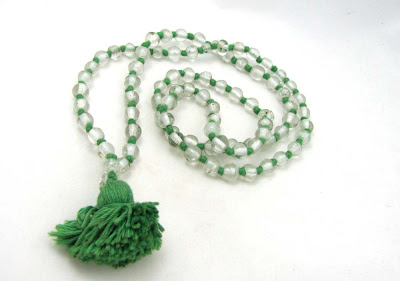 These I made at the experimental commune I attended for a semester in Maine when I was 18
We actually got college credit for some inventive courses that were designed for the program.
I mostly hung out in the kitchen cooking those three months but we did have a resident guru of sorts- Harry from India, who taught us how to make these malas
He is now know as the Pink Prince as he was indeed a prince from a palace in Punjab.
He was teaching me how to cook Indian food which I was obsessed with at the time.
Remind me to dig out some pictures of him. He was a handsome devil and his vows of celibacy were challenged greatly by us playful and nubile 18 year old girls at the commune. 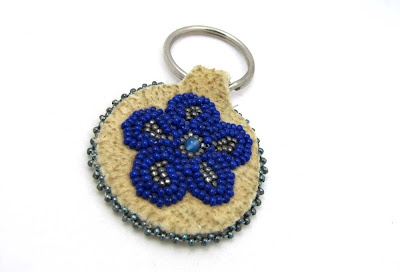 This is my first seed bead project. I was doing the "Artist's Way" course from the book by Julia Cameron at the time and wanted to make something for my father.
These were seed beads that had belonged to my father when he was a boy. I had found them in my grandfather's attic when I was a child.  they were in little corked glass vials. I held on to them and hauled them to Alaska when I moved here.
That's smoke tanned moosehide as the base done in the native Alaskan style.
I did a lot of this sort of work for awhile until someone told me about lampwork.
( Thanks Bruce Anders) 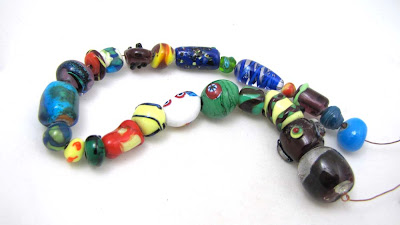 Haaaah! look at this mess, my first beauties
but when at one of my first craft shows that I put them out at the last minute and sold $100 worth of beads of similar caliber I knew I was onto something. 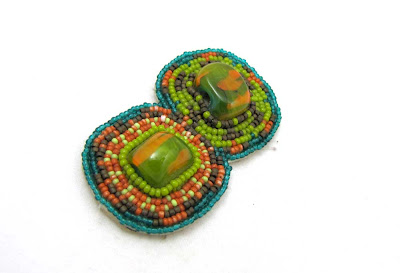 And sometimes they would crack right in half.
How convenient for my designs...instant cabs.
( also sewn onto moosehide) 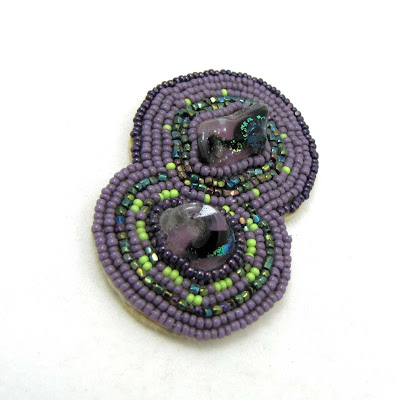 a little dichro in there 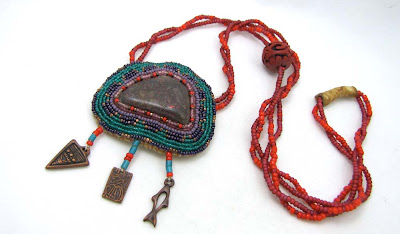 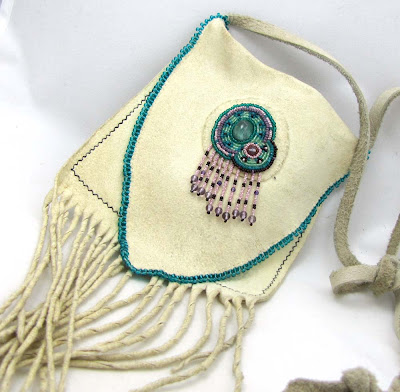 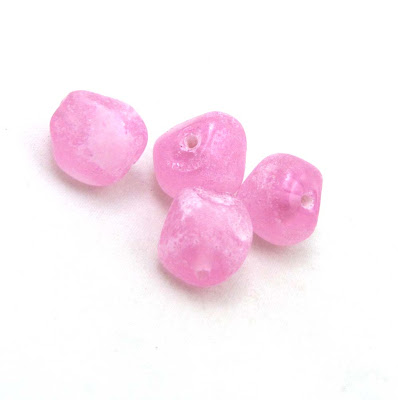 Fast forward~
We just jumped up to yesterday!
I was trying to make some crusty blingy nuggets after seeing all of fancifuldevice's
sparkliness. I was encasing some dichro glass but the sparkle all but disappeared and made the light transparent pink glass turn P I N K! ( screaming pink!)
so very pink!
I have some ideas on how to retain the inner sparkle. I'm gonna give it another try today. 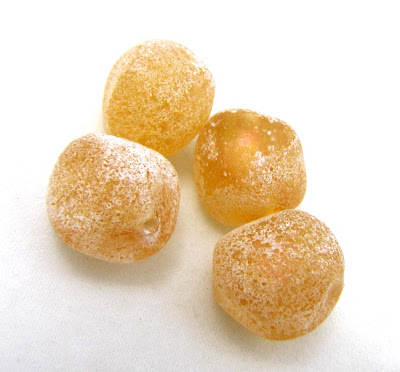 These kept a bit of the inner dichro fire. Shows up a bit better n person.
They remind me of my father's old horehound cough drops 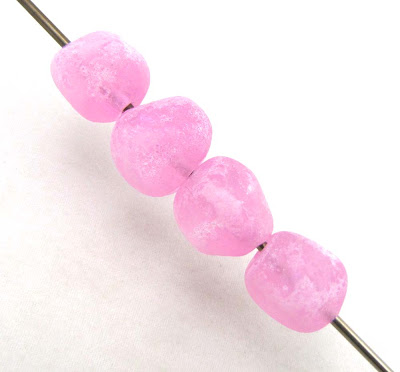 I'm loving the nuggety shape of these though so there will be more manifestations of these. 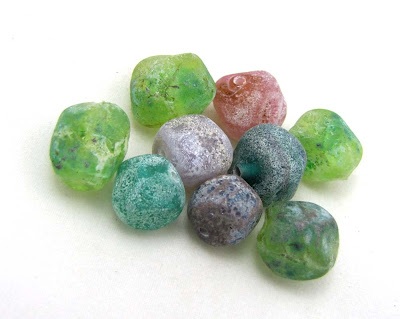 Fruity pebbles!
Unfortunately the green ones cracked except one. Apparently the two glasses I mixed on these weren't compatible. Anyone want some crack beads? 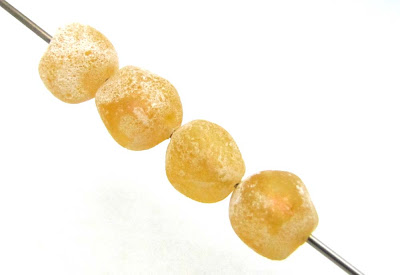 It's still been warm enough to not have to heat the Garaj Mahal extra much.
It's been a cool 50 degrees in there until I get the portable heater going which was a good thing to do since I had unplugged my stepson's little beer fridge when he moved out inadvertently unplugging our entire freezer of salmon and blueberries and discovered it in time when I had to run the extension cord downstairs because I'll blow a breaker otherwise with the kiln, stereo and heater going.
The fish was thawed out enough to be bendy but still cool enough to be safe so I just refroze it.
So I can continue with my sweatshop activity until I get froze out. 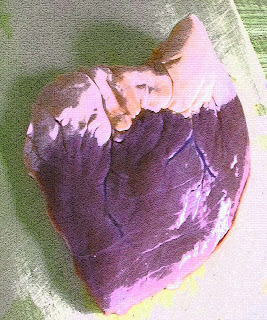