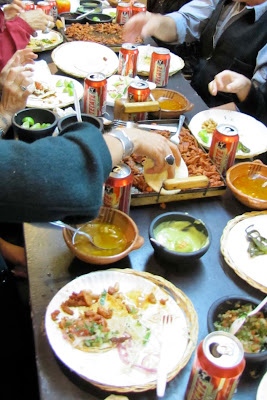 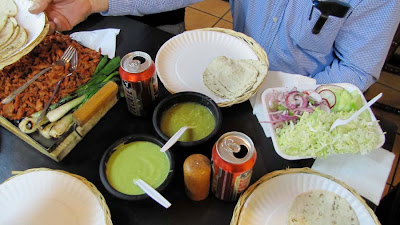 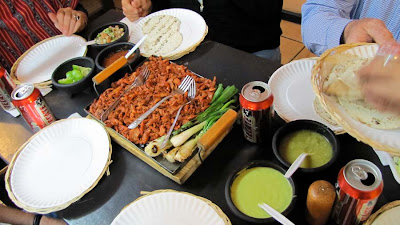 Serve yourself and dig in! 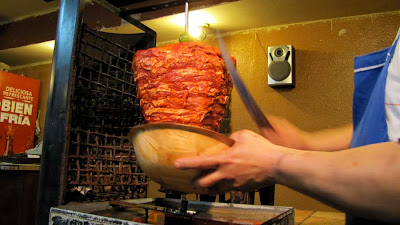 Fresh off the spit and then grilled. 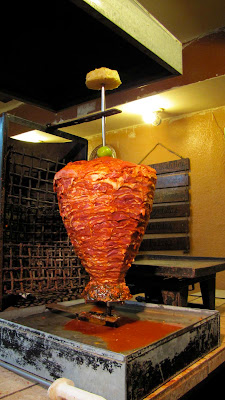 Pineapple to tenderize.
When our Mexican-Lebanese friend Patricia told another friend about the best place to find Tacos Al Pastor across the border the word has been spreading like wildfire amongst our friends.
One of the delightful things about living close to the Mexican border is that it's no big deal to cross over for a nice authentic and quite affordable meal out.
I guess I was surprised at the fact that there was a Mexican-Lebanese population in Mexico just as I'm surprised at Mexican's love of sushi which is evidenced by a preponderance of sushi bars in Northern Mexico.
The first time we went to Apataco in Agua Prieta it was a group of five gringos and our guide Patricia who has warmed her way into the owner's heart with her fluent Spanish and good tipping and most likely her beauty.
Next door to the restaurant is an Expendio where we can purchase our Tecate to accompany the meal.
I was surprised to see the Shawarma type spit roasting that you can see in any gyro or kebab stand in the Middle East or European- Middle eastern restaurant. We had found that that was the most affordable food on our Euro-trip aside from ham and bread sandwiches.
When you order a "Plaquete" of tacos al pastor you get a heaping pan of the roasted and shaved beef (normally pork in Mexico) which has been marinating in spices and pineapple. You get a wonderful fusion of Mexican and Middle Eastern flavor in every bite. The pineapple tenderizing it to perfection.
We found out that the beef is organically raised by the owner and is fresh as can be which is a bonus. This place is open until 4:00 AM which makes it popular with the local bar crowd I hear.
With cebollitas (roasted green onions) guacamole, red and green salsas, charro style beans, shredded cabbage, onions and lime and pico sauce along with platefuls of either corn or flour tortillas make for a well rounded meal.
We scooped up the meat in our tortillas and garnished them till they nearly broke.
I found that the meal wasn't as heavy as most Mexican meals I'm accustomed to. For one thing we didn't fill up on bowls of chips for starters and there was no cheese or rice in this meal either. More room for Tecates the way I see it. We each must have filled 5 tacos and our bill divided by six people came to a grand total of $4 excluding the beer.
We already have found an excuse to return, this time with ten people. On our walk back to the border crossing we found a paleta stand which features Mexican popsicles with flavors of tamarind, coconut and even pineapple-chile.
I'm afraid it could become a weekly routine!
Posted by Numinosity at 1:30 PM